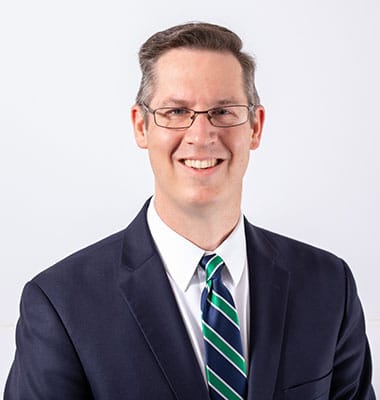 Brandon Osterbind, attorney and co-founder of Osterbind Law, PLLC, focuses exclusively on helping injured people recover their health, their dignity, and the money that their injury has cost them. Brandon has learned, through years of representing injured people in central Virginia and the greater Lynchburg area, that tragedy can strike anyone at any time, but that healing is always possible. He started Osterbind Law with his wife, Kelly, because he discovered that he had a passion for helping injured people get better—and because he loves the feeling when he gets to hand over a check!

Brandon was born and raised in Richmond. He grew up focused on the practice of law, getting an early start by working part-time in a law office during high school. He attended Liberty University for his undergraduate degree and immediately continued on to Liberty University School of Law, where he graduated first in his class.

After law school, Brandon clerked for the Honorable William G. Petty of the Court of Appeals of Virginia. He then worked with a local small law firm, where he was quickly promoted to partner. During those years, Brandon represented a wide range of clients in a variety of different cases. Yet, Brandon found himself repeatedly drawn to cases involving personal injury. What’s more, his clients felt the same way, requesting him specifically for injury cases. As he tried those cases and honed his skills, Brandon learned the usual way to represent injured people—but he also started to learn that there could be a better way of doing things.

In 2017, Brandon and Kelly, a former prosecutor, decided to start their own injury law firm so that they could practice injury law the right way. To Brandon, the right way means helping clients maximize their financial recovery by helping them maximize their physical and emotional recovery—which demands a team effort. That’s why he’s assembled a staff of specialists who provide the wraparound services that the firm’s clients need. Unlike a typical law firm where individual cases are assigned to individual attorneys, everyone at Osterbind Law works on every case. Each client, therefore, gets the best and most comprehensive representation possible.

Together, Brandon and Kelly coordinate on high-level strategy, considering the strengths and weaknesses of each case, determining what experts are needed, crafting factual and legal arguments, and resolving any unique legal or evidentiary issues. The team also includes attorney Hannah Bowie, who executes that strategy and oversees the day-to-day management of individual cases; and David Abraham, a retired insurance professional who meets with insurance companies and reviews the details of clients’ insurance policies. At Osterbind Law, everyone on the team is responsible for the success of every case.

With Brandon’s representation, every client benefits from his extensive injury law experience, along with his dedication, professionalism, and meticulous attention to detail. He inspires mutual trust and respect both with his clients and with his colleagues at the practice.

Over the years, Brandon has been recognized repeatedly for his hard work:

Brandon lives in Forest with his wife Kelly, their four children, and their miniature dachshund. He is an active member of Thomas Road Baptist Church and the Oikos LifeGroup.